It had been an amazing week. Not because I did something specific. I worked pretty much the last 2 weeks through. But because of the East wind. Such a special weather system in Namibia which can happen in our winter. Is never guaranteed to happen. You never know when it happens. How long it stays. Or how strong it is. This time it was pretty strong. The strongest I’ve experienced the East wind since I live in Swakop. 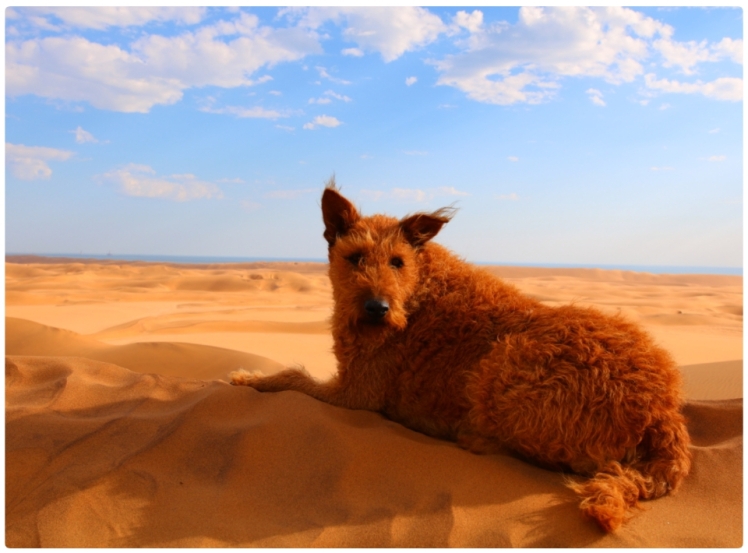 But you guys are probably wondering „what is the East wind“? Let me explain to you about this dusty, hot and very sandy east wind. This is a phenomenon which occurs only when the central areas of Namibia experience extreme cold, when temperatures over the Atlantic are hotter than inland causing a low pressure area. Wind is normally a south-westerly but at times like this, it turns 180 degrees and blows from inland and as the wind drops in altitude, temperatures rise dramatically and blows in sand and dust from the desert. This time the East wind started already in the evenings. Still very calm, but during the night it picked up and reached on friday and saturday morning speeds around 35knots with wind gusts up to 50 knots. A proper sandstorm is formed. Even in town it wasn’t pleasant. It you don’t have to go out in the morning stay inside the house and close all the windows. Which we did, since no tourist activities could happen in this condition. All of us would start working around 2pm once the East wind died down. On thursday until Saturday afternoon it stayed east the whole day, but died down a lot in the afternoon before it started pumping again at night. These days bring us the most amazing sunsets during the year.
Blowing from the desert does it not only blow sand and dust to the coast but as well heat. Which brought us temperatures close to 40 degrees which is hotter than any summer days. Even in december/ january we don’t reach temperatures over 28 degrees on the coast. 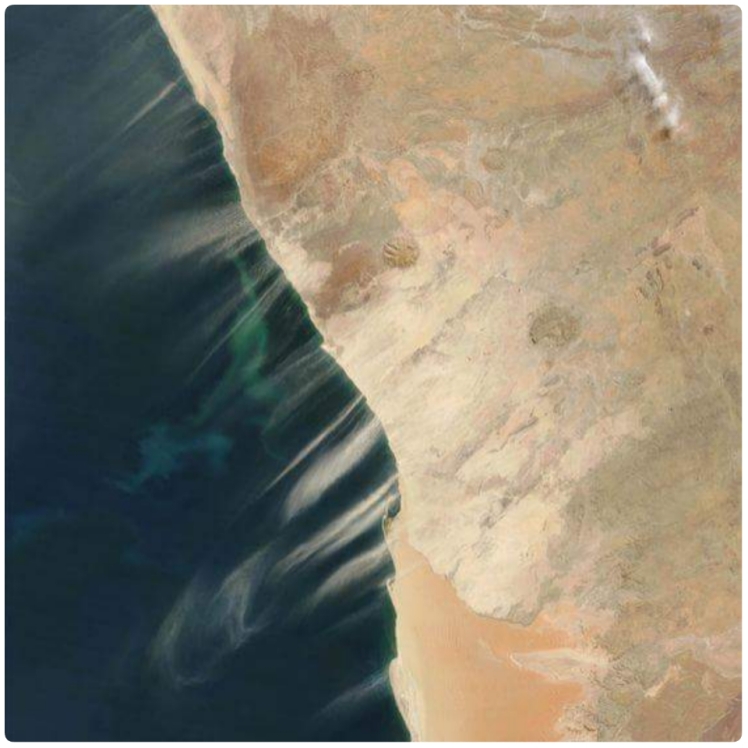 This picture was taken a few years ago from the NASA showing the coast during an easterly sand storm where dust and sand is blown for many kilometers into the sea. 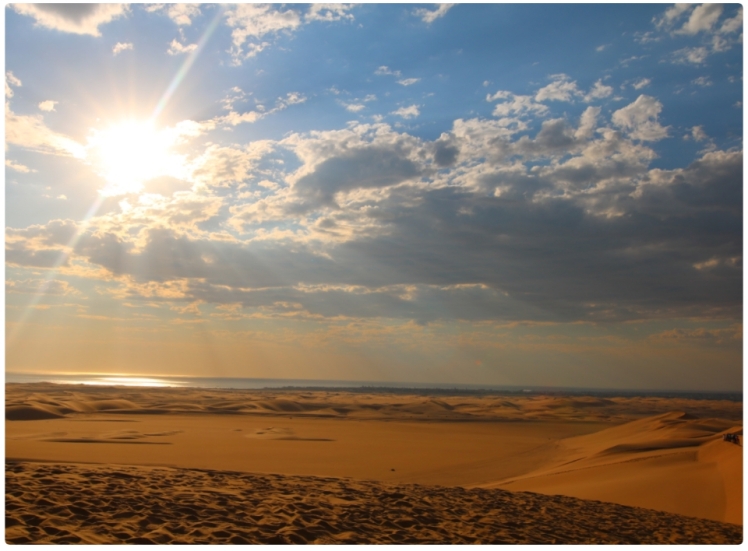 Working the afternoons on the dunes is as well not the worst thing ever. I mean look at my working office. That is the view. Seriously, we can have idiots and arrogant and lazy people on the dune that day. All together. But we don’t care. We got patience. We are chilled. Because we are working in paradise. And if I’m walking home from work. Walking along the beach. Stopping by at the beach bar. Having a gin&tonic. Watching the sunset. 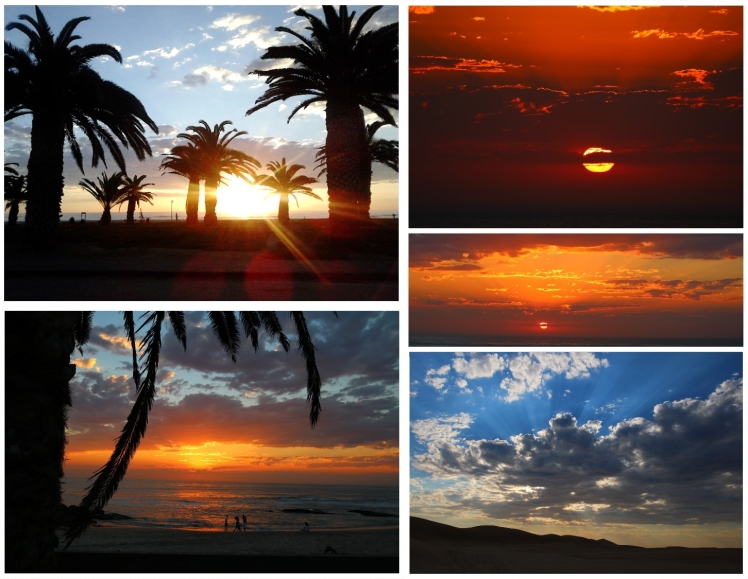 I would say life could be worse. 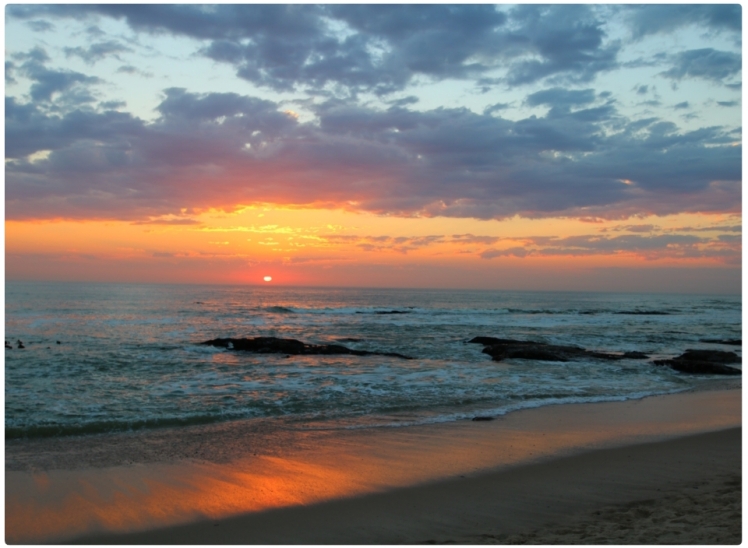 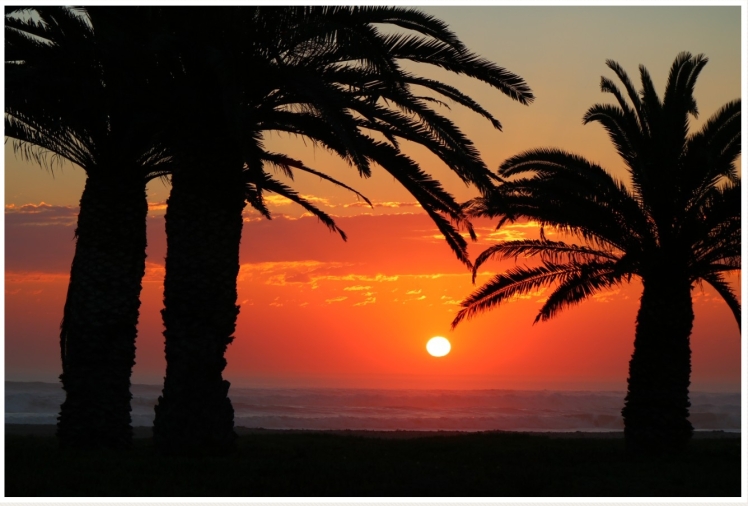 The storm is over. The coast still warm. The sun is turning the ocean into a red sea. A few more days of summer temperatures and then everything will be back to normal. Winter hats and jackets out of the cupboard. Misty cold mornings are ahead of us. And who knows when the east wind will be back again? This season still? I doubt it. Probably next year again. But we will see…